The most recent company to fail in the wake of FTX’s abrupt demise was cryptocurrency lender Genesis Global Capital, which filed for bankruptcy.

According to court documents, the firm filed for Chapter 11 bankruptcy in the Southern District of New York on Thursday. Its petition stated the same estimated asset and liability range, $1 billion to $10 billion.

In the midst of a liquidity crisis, parent company Digital Currency Group (DGC) had been in confidential negotiations with various creditor groups, and Genesis had previously warned that it may need to file for bankruptcy if it failed to raise cash.

Following the failure of hedge fund Three Arrows Capital (3AC), financial strains began to emerge at Barry Silbert’s DCG. Genesis stopped withdrawals in November, right after the cryptocurrency exchange FTX (where some of Genesis’s funds were held) filed for bankruptcy. 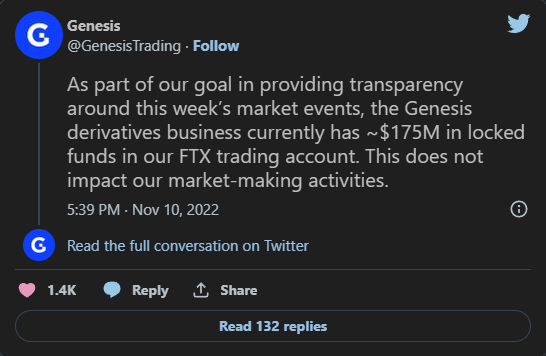 Genesis laid off roughly 30% of its workforce in the most recent round of layoffs in January. Interim Chief Derar Islim previously told clients that it would take “additional time” to find a solution to a liquidity crisis at the lending unit.