As the fallout from the collapse of cryptocurrency exchange FTX spreads, cryptocurrency lender BlockFi has filed for Chapter 11 bankruptcy protection.

BlockFi claimed more than 100,000 creditors in a Monday bankruptcy filing in New Jersey, where it is based, with liabilities ranging from $1 billion to $10 billion.

In what has already been a disastrous year for cryptocurrency, prices fell on Monday. Bitcoin, one of the most widely traded cryptocurrencies, has dropped nearly 70% in 2022 to less than $16,000 per coin.

BlockFi Inc., which was founded in 2017, stated that bankruptcy protection will allow it to stabilize and restructure the company. This restructuring will include an attempt to recover all obligations owed to it by its counterparties, which will include FTX and related corporate entities. 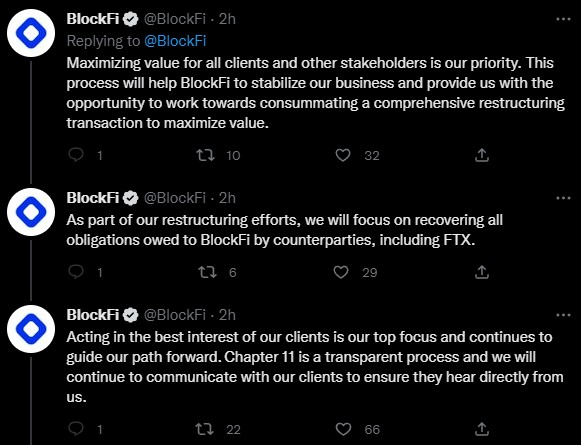 They had ties to FTX, which filed for bankruptcy in the United States earlier this month after traders withdrew $6 billion from the platform in three days and rival exchange Binance abandoned a rescue deal.

BlockFi listed FTX as its second-largest creditor in a court filing on Monday, with $275 million owed on a loan extended earlier this year.

BlockFi was to receive a $400 million revolving credit facility under a July agreement with FTX, with FTX having the option to purchase it for up to $240 million.

During the pandemic, crypto lenders, the de facto banks of the crypto world, boomed, attracting retail customers with double-digit interest rates in exchange for cryptocurrency deposits. On the other hand, institutional investors such as hedge funds seeking to make leveraged bets paid higher interest rates to borrow funds from lenders, who profited from the difference.

Crypto lenders are not required to maintain capital or liquidity buffers in the same way that traditional lenders are, and some have found themselves exposed when a lack of collateral forced them – and their customers – to bear large losses.

The implosion of FTX is still being sorted out and it is unknown how much collateral damage it could inflict.

BlockFi currently has $256.9 million in cash on hand, which it believes will be sufficient to support some operations during the restructuring.